I’ve noticed a trend in the fishing scene via social media websites of a large push in the Scent scene over the last few months. From one of the bigger companies bringing in a product from the U.S. called Pro-Cure, to a local fishing charter operator based in Port Macquarie N.S.W. with his secret home brewed mix’s called Sax Scent. So I thought, what better way to find out what product does the job than to test out the 2 new guys against 2 old favorites, Squidgy’s S-Factor (Australian) and Mega Strike (U.S.A.). Just a reminder we have no affiliation with any of these companies.

So last week I put up a photo on our Facebook page of the 4 scents and had an overwhelming 65 comments from our followers stating which scent they were backing to come out on top. It was interesting to see that the 2 newest players ranked highest, but may I also note that these 2 have been pushing their products on Facbebook a lot more than the older guys. Counting the comments it went something like this: 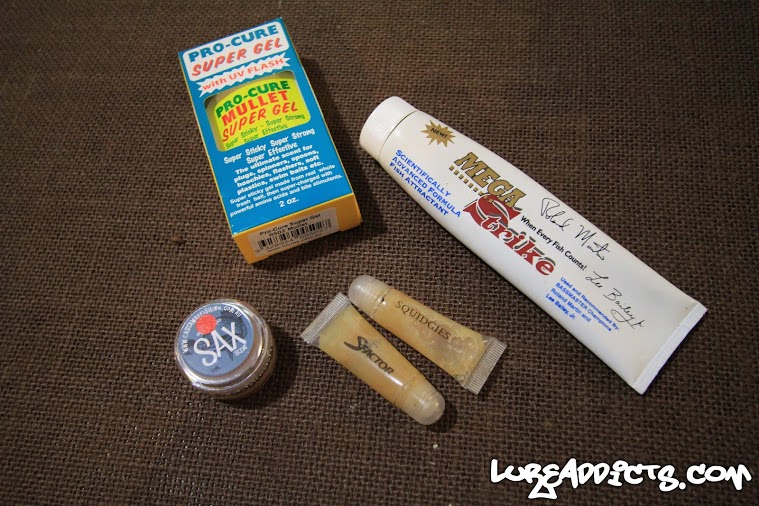 So aside from fish catching ability, which I will leave to last, I would look at a few different aspects of each product from price, quantity, texture, stickability, smell,  and ease of use. So lets start from the beginning:

Probably the first thing anyone is going to notice when they pick up a scent in their local tackle shop will be the price. For some people this could be the deciding factor as to if they purchase or not. 3 out of the 4 scents tested are available as a stand alone product, which can be neither here nor there depending on if you use Squidgy’s soft Plastics. Topping the list at most expensive per purchase is Mega Strike which I picked up for $21.95, followed by Pro Cure for $14.95, S-Factor (with plastics) for $9.95 and Sax Scent coming in cheapest at $8.95. Now it needs to be noted that S-Factor is only available inside the package of any purchase from the Squidgy Pro range of soft plastics. S-Factor has created a name for itself as being one of the tried and tested scents for Australian fish for years, but the inability to purchase it separately from the soft plastics has seen people look else where. From what I have found online through what looked like an accidental photo leak (which was deleted within hours, see below) and replies from questions on Squidgy’s facebook page, I believe that S-Factor is soon to be released in a tube much like Mega Strike. 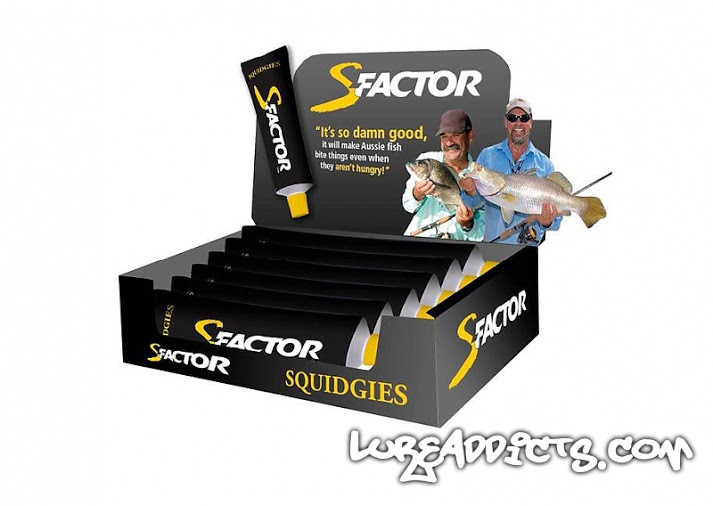 So it’s all good and well stating the price per purchase, but the amount of scent per purchase also needs to be taken into account. Both Mega Strike and Pro-Cure label their scents at 2 oz or 56 grams, Sax at 10 ml (approx. 0.338 oz or 9.58 grams) per jar and S-Factor being unlabeled and nothing available online, but at a guess similar to Sax. So to come to a winner in the quantity section of the test we need to compare it to the cost and the best way to do that is to break it down into a cost per gram amount.

S-Factor – $1.03 per gram (estimate as no quantity value available)

Texture is going to come down to a personal preference but I’ll give you an idea of each one and what I think is better.

Pro-Cure: A lot softer and slightly runnier than the others, the sticky gel squeezes out of the container nozzle with ease and easy to spread.

Sax Scent: More wax than gel. Firm to touch at first, but gets softer as soon as you start to apply pressure with your finger to get it out of the tub. Also becomes very soft and melts if left in the sun.

S-Factor: Firmer than Pro-Cure but a lot softer than Sax. This is still a gel consistency but with lumps mixed in.

Mega Strike: Firmer than S-Factor and squeezes out of the tube like a worm. Found it hard to smear if off from the tube without using a finger.

Stickability refers to how well each scent was able to stay on the lures and were tested on Soft Plastics, Hard Bodies and Blades. In one of my test for their fish catching abilities I applied the scents to 4 different plastics and drifted them behind the boat to see what one would get picked up dead sticking (not working the plastic, just leaving it alone like bait). From my test I found that there wasn’t a great deal of difference and re-applied the scents after 45 mins. I would say that in the dead sticking test that S-Factor had the least need for reapplication followed by Sax, Pro-Cure then Mega Strike.

The next test was on the hard bodies fishing the edges. Sax came in first by small margins over Pro-Cure with very little need to reapply after 30 mins of casting followed by Mega Strike then S-Factor. The same result was had for both Blades and Soft Plastics (Z-man Grubz and Squidgy Wrigglers).

Now this could perhaps be a pointless one to judge, as who knows if the smell of the product to a human has anything to do with it’s practicalities out in the field when trying to attract fish? However just as people who fish with lures are attracted to new exciting colours and patterns, surely there will some in the crowd who will pick up the scent, open it and have a sniff to see if they think it will work. In order of how I found the smells from strongest to weakest

Application of the scent is something to be considered as when you are holding your rod in one hand, hold the lure in the other and still trying to apply the scent it can be a bit of a juggling act. A big thing that I didn’t think that would have come into play at the beginning of the test was the size, type and shape of the container that the scent comes in. As you can see from the photo above they are all different.

Sax: Lip gloss style container with screw on lid. A wipe of your finger across the top to get the scent then smear on the lure. Easy.

Pro-Cure: Squeeze container with pop up nozzle. Pop nozzle up with thumb, squeeze some on the lure then wipe with finger, then close the nozzle.

Mega Strike: Toothpaste like tube, found that consistency of the scent made it difficult to squeeze out of the small opening in the tube. Annoying to wipe the tube on the lure but works better if applied to finger first. Tube is too big for single handed use when trying to squeeze the product from the back of the tube to the opening.

S-Factor: Tube is a great size for one hand operation, angled nozzle so you can use the tube to apply the scent easily.

So this is where the real review comes into play. But there are so many variables with a test like this that it makes it very difficult to come up with a conclusive result that says that one product is better than the other. I think that there will have to be further test over different days to have any real bearing on a definitive answer.

Test 1: The “dead stick test” seemed like the only way to get a result that would be able to give any light as to which one works best. The idea behind it was to rig identical soft plastics that have plenty of action in the tail, on identical weight jig heads and identical leader then drop them out the side of the boat and drift them slowly to see which one could pick up the most fish by tail action and scent alone. So 4 Squidgy Wrigglers in Wasabi colour were rigged onto 1/6th oz TT jigheads joined with 4lb fluro leaders and sent down to do their best. The rods were secured and left untouched leaning up against the gunnel using only the rocking of the boat to impart any action and so that they would all move together at the same time. 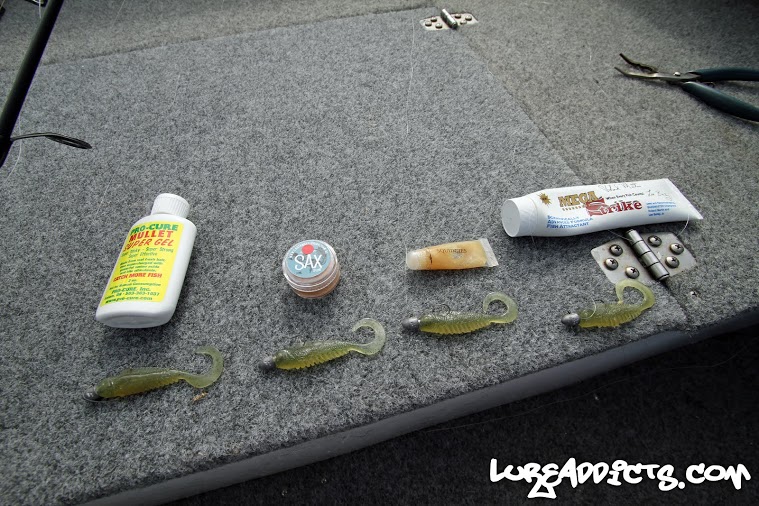 I wanted to give this method the best chance of success, so picked 4 spots at St Georges Basin and gave each spot a 30min drift before moving to the next. I hoped by doing this to eliminate the “no fish in that spot” people and sounded around before setting up for the drift. The result of 2 hours and 4 different locations was……Zero’s. Not one fish, not one bite, not one tick of the drag. I had been fishing the Basin for 2 or 3 hours prior to commencing the test and found it to be very quiet with only 2 fish coming on board before. So this seemed liked it could have been a reason for not catching anything on a dead sticked plastic.

Test 2: Next up I went for a test of 5 minutes of exclusive use with each of the set up’s from the previous test, using the same slow lift action with every plastic. I went in the order of Pro-Cure, Sax, S-Factor then Mega Strike. So the results after this test were:

Although it may look like a stand out result for Sax, the issue I have with this test was that I was still drifting, so every 5 minutes I was going to be in new fishing grounds and that creates a huge variable that can’t be counter acted.

I think I will have to repeat the dead stick method as that will be the only way to get a clear result with minimal variables. So keep an eye on this post for updates.

It’s hard to go past the results of the fishing test with Sax scoring 2 – 0 Vs. the rest of the field, but I still think that test is inconclusive. Although more expensive than it’s counterparts in a per gram result, it does come in cheapest per buy and had results to back it up. The container is simple for one handed operation and it stayed on the different lures tested longer than the competition which means you will use less product per trip. In my opinion it should be on your shopping list next time you visit your local tackle store, and at only half the price of most lures it’s hardly going to break the bank and definitely worth trying out.

About the Author: Tim McGoldrick